Throughout the globe, there are 23 species of angel sharks. Their distribution ranges from temperate to tropical marine waters and most of these species inhabit areas in the continental shelf and upper slopes down to 500 m. Unfortunately, due to angel sharks’ life characteristics, i.e. their slow growth, their low reproductive rate as well as their demersal nature which makes them susceptible to large-mesh gillnets, coupled with the intensification of fisheries, they have become the third most threatened family of elasmobranchs in the world, with many species in urgent need of conservation

The recent discovery of several records of angel sharks in the Cyclades and Dodecanese Islands indicated that these areas are potentially highly important for the three species. In light of this situation, the Mediterranean Angel Sharks: SubRegional Action Plan (SubRAP) GSAs 22/23 (the Aegean Sea and Crete) was developed in line with the Mediterranean Angel Sharks: Regional Action Plan, aiming to advance angel shark conservation in Greece. 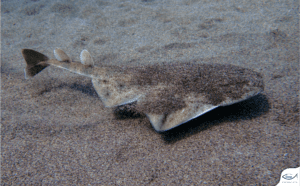 In this context the Angel Shark Project: Greece was created; this is a collaborative project led by iSea and supported by ULPGC, ZFMK, ZSL, and Shark Trust with an overall aim to investigate the importance of the Greek side of the Aegean Sea for all three angel shark species present in the Mediterranean (Squatina aculeata, Squatina oculata, Squatina squatina)

The project’s objectives are:

Objective 5: Strengthen the national legal framework in Greece for the protection of angel sharks; and

Projects implemented with the support of the Angel Shark Project Greece